We had already done five trails for the day and this was to be our last one. It looked like we were even going to finish before the sun went down. We were running Corkscrew Gulch backwards to finish at the pavement.

We headed up, and we soon found ourselves surrounded by sheep. We got out, our mouths hanging open. It was pretty cool! There was even a sheepdog managing the flock.

It wasn't long before we were over the top, though. We headed down the long descent, and then we saw another Jeep coming up. Luckily, they saw us and pulled into a large switchback.

The rest of the way out seemed bumpier than we remembered, full of potholes. Some of the holes were pretty big, in fact. It made us have to go pretty slowly at times, but we still made good time. We didn't see anyone else.

We were soon at the trailhead and then out next to the ponds. We aired up and got ready for the pavement before the sun was even down. Imagine that!

We headed in to Ouray to have a good steak dinner at the Outlaw Steakhouse, and everyone got to buy t-shirts at a tourist shop next door to the restaurant while we waited for our table. It was a fantastic day, even though we were exhausted. We really saw a lot of the San Juans. And this was only day one! 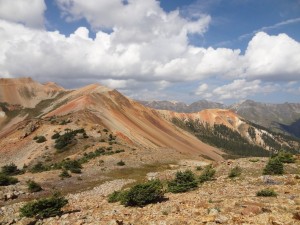