Corkscrew Gulch has always been one of our favorite trails when were in Ouray, mostly because of the Red Mountains.  It's not a technically difficult trail, but it can be intimidating on the high shelf roads.  We did Brown Mountain first and then headed off to other areas via Corkscrew Gulch.

The skies were much clearer than they were the day before, so the fires that had been burning in many places in the western United States must have been dying down.  It definitely made the scenery better.  There are so many colors on this trail, and we took our time enjoying them.

It didn't take us long to get to the scenic stop, and we stopped there for snacks and photos.  It's one of the most scenic spots in the area because of those Red Mountains.  After hanging out for a bit, we started up the hill to the pass.  It's a fun climb!

Before getting to the pass, we turned to do the optional overlook.  We got lucky, and though there were ATVs all over the place we didn't have to get around anyone on the way out or on the way back.  There are some pretty narrow shelf roads on the way out to the overlook, so things could have been a bit scary if we had.

We spent a long time at the overlook, though it was windy.  Niko got his drone out, and it handled the wind like a champ.  We took a ton of photos and just relaxed up there.  We didn't find out until later, but we chose trails for the day that would keep going to high overlooks where we could see the other overlooks we'd just been to.  This was the first of those overlooks, and it's one of our favorites.

We headed back out and down the other side, and it wasn't long before we were at the end and the intersection with Hurricane Pass and Gladstone Road.  We were off to check out more around the old site for Gladstone, so we turned right and headed down. 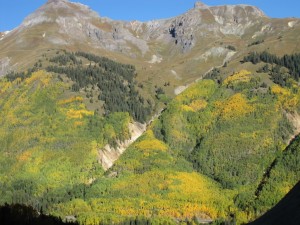 Led by Roger R.
We had plans to do four trails in one day, and if all went well we were hoping to get five trails in before the end of the day. So, we left Ouray at about 8:00 in the morning and headed south on highway 550 for the Corkscrew Gulch trailhead….
Join Us!
If you aren’t a Member or Subscriber, you can’t see all of the content on this site. Get membership information to see why this site is best when you join and log in