Trail Run on May 29, 2008
Report and photos by Monica I., Trail Leader
View trail information for Cliff Hanger

We had run Jackson Hole the day before so we could see the bottom of the cliff, and now we were going to run Cliff Hanger to see the top of it. It was a nice two-part day. The sun was out, and it looked like it was going to be a fabulous day.

We all started down the trailhead obstacle, having a good time twisting and turning. No one had any issues, though it's always nice to start a trail with a challenge.

Robert made it down the first hill to find that a bolt had sheared off of his steering box mount. He would need another bolt before he could continue the trail. His only luck of the trip so far was that he was only yards from the main road and pretty close to town, so he should be able to catch up with us. His bad luck was continuing after breaking the day before, though.

Robert left us and we continued on. The drop-off just after the first obstacle was as steep and big as always, but we assumed that at least one of us could get over it. It was pretty big, but we were confident. The obstacles just after it were also a lot of fun.

We got to the Creek Climb and everyone got on it expecting it to be easier than it actually was. We were all in for a surprise, though, and it turned out to be a bit difficult. That made things fun, though, and everyone had a good time getting over and through it.

The sun was out and everyone was in a great mood when we got to Rock & Roll. Again, everyone thought it was going to be easier than it turned out to be. No one had any real issues, though, and everyone had a good time in it.

We saw a single Jeep on his way back out of the trail, and then later we'd see two other Jeeps on their way in and their way back out. Otherwise, we had the trail to ourselves. We were soon at the Z-Turn.

The Z-Turn is significantly different than it used to be. Now, there is a smooth trail that goes right through it, making it pretty easy unless you pick a crazier line. Everyone took the crazy line at the bottom, and each person found their own way through the top of it. Some people were denied their lines, but most people found success. It was definitely a fun obstacle.

The trail soon turned and we found ourselves on the cliff. We could see the Jackson Hole bluff and the Jackson Hole trail below us. We could also pick out the parking area at the bottom of the Jackson's Ladder foot trail. From this high vantage point, we could barely see the switchbacks that bicyclists would follow as they carried their bikes to the top. It looked insane!

The Cliff Obstacle was a little intimidating, but not too bad. Everyone made it down and through it without a single issue. We soon found ourselves away from the cliff and on regular trail again.

We also recognized the top of the Jackson's Ladder trail to our left, and some of us wanted to check it out. The others waited at the main trail and then headed to lunch.

Don ran down to the bottom and back up while Dane, Monica and Colten did some sightseeing at the top. We even got to see two people carrying their bikes up the to the top, which looked very difficult. It was cool to watch.

We had a nice lunch and then attempted the tippy section. It's definitely tippy, and if you messed up you could end up flopping. Bill got pretty tippy for a bit, but everyone else learned from his wacky line and took it a little easier.

The Play Ledges were fun, but no one had any success. Michael got the closest, almost making it up and over the top but he didn't have enough clearance. It's definitely a place where you could kill a lot of time playing.

It wasn't long before we were at the end of the trail at the overlook. The scenery was amazing, and we really enjoyed it. It was soon time to go, though, so we headed back the way we came.

The Cliff Obstacle was definitely intimidating, but everyone made it through just fine. It's not that it's particularly tough, but if you screw up it will go very badly. We were all happy to be through it.

The Z-Turn was a piece of cake on the way down, and everyone took it easy. We came around the corner and heard Robert on the CB, and he said he could see us. After adjusting and looking around, we could finally see him out on the Kane Creek Canyon Road. Everything was fixed, and he was going to meet us.

We all came down the Crooked Ledge, which almost seemed tippier and worse on the way down. That's when Robert caught up with us. He was the only one to drive up the steep and sandy side, and he made it look easy. Then he came down the twisty side, but his YJ didn't flex as much and he didn't have nearly the scares that the rest of us did.

We worked our way out together, and no one had any problems. We soon found ourselves at the big ledge near the exit.

Don tried the middle but he couldn't climb it. He straddled the corner and walked right up it without any problems. Michael, Robert and Ladd all tried to climb the true ledge as well, but none of them made it. Everyone ended up walking right up the corner of it and out.

On the last obstacle, people tried entirely new lines (new to us, anyway). It made for a fun time, exploring new ways up to the top.

Almost everyone was out, and Robert gave it a crazy, bouncy try at the bottom. There was a bit too much craziness, however, and his rear axle simply blew up. His rear drive shaft was hanging down, and his gears were still attached at the end. There was a big hole in his axle where they used to be. He was toast.

He cleaned out all of the oil and disconnected his drive shaft. We had caught most of it before it hit the ground, but what had found the sand we scooped up with a shovel and bagged to bring back to town. He winched himself to the top of the obstacle, beaten by Moab this trip.

With everyone out, we worked our way back to town. Robert had no issues getting back in 4-wheel drive high, and soon his Jeep was back on his trailer.

It was a depressing end to a fun day, with Robert's luck going from bad to worse. We had a good dinner, though. Robert planned on enjoying the rest of his stay there with his son, Colten, so it wasn't all lost. At least he towed his Jeep to Moab so he could easily get it home.

What a crazy day! 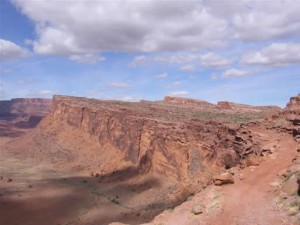 Led by Ladd G.
Ladd and Bob met up with Gary and his family and dog at 8:30AM in Moab, and we hit the trail around 9:15. We aired down just before the first immediate obstacle off the road. We talked to some folks at the trailhead and they said it was still a…
Join Us!
If you aren’t a Member or Subscriber, you can’t see all of the content on this site. Get membership information to see why this site is best when you join and log in