Ladd and Bob met up with Gary and his family and dog at 8:30AM in Moab, and we hit the trail around 9:15. We aired down just before the first immediate obstacle off the road. We talked to some folks at the trailhead and they said it was still a good trail even after it had been filled in with dirt in 2005, although we would not see anything much more difficult than the first obstacle.

The first obstacle was pretty hard and would keep most stock vehicles off of the trail. Our three Jeeps took it pretty well and we were on our way.

Even after the rains the day before, the creek was pretty mellow, though the line out was still a little challenge and slippery when wet.

We were told that the trail had be filled in with sand and two-wheel drive trucks were driving it the year before to work on a problem with a pipeline further up the trail. There were section where we could see the sand, but most of it had already eroded.

There is a one large obstacle that has three lines. Left is for highly modified vehicles only, right was just about right for us, and the middle, which has a bad crack and was kind of hard on 33" tires. Ladd took a run at the middle line for fun, and could not grab enough traction to get over. Bob followed Ladd's line, but his bumper was too low and he bent it in on one side after just kissing the rock. Resetting to avoid hitting the rock, he set in the crack and wiggled over, his boulder bar on the right levered against the rock and getting him over the obstacle. He also got some minor scratches on the fender flare.

Most of the trail was relatively easy. The skinny section along the cliff was scary looking, but not a problem (they would be a problem if heights bothered us, though). The trip back was a bit scarier since the driver's side is at the drop off and you are a bit off-camber.

Gary's family was a family of runners, so a couple of them ran all the way up and down the trail. Their dog kept up the whole way. Gary tried to fall off of a cliff once but survived.

We went all the way to the top and enjoyed the views. Bob hung off the cliff for some pictures, and then we headed back. Our plan was to make Moab Rim for lunch. 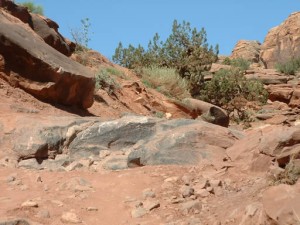 Led by Monica I.
This trail was crazy and probably too big for a lot of our vehicles, but we all made it through with only a little help from a tow strap for a few of us at the very end. It was definitely intimidating and most definitely an adrenaline rush. We had…
Join Us!
If you aren’t a Member or Subscriber, you can’t see all of the content on this site. Get membership information to see why this site is best when you join and log in