The day started out fairly nice. JJ and Dave met up at the police station in Boulder and then headed up to the trailhead.

We got to the first obstacle and Dave walked right through on his new 33" tires. JJ came through next in his Unlimited Rubicon on 33" tires. His longer wheelbase gave him a bit more of a challenge. However, a few attemps and some spotting from Dave got him through. At this point someone caught up with us so we let him go by.

The next obstacle was a chute, so to speak, and about 25 yards long with 3- to 5-foot boulders strewn throughout it. Dave went through with no troubles. JJ decided to skip this obstacle because a group of three rigs caught up with us. The smallest of their group was on 35" tires, while the biggest was a very nice-looking CJ-7 on 37" tires.

The next obstacle was a slab of rock 12 feet long pointed up at a 25 degree incline. Dave had tried it before but was unable to make it because of his former, small 31" tires. He hoped to make it this time. After 5 or 6 atempts he gave up -- the rain from the last few days left the ground too muddy to get any traction.

JJ was up next, and after some coaxing he decided to give it a try instead of driving around. With a couple of attempts and some go pedal and he made it through. Very nice, especially when everybody was watching.

The next obstacle was just a couple of large rocks separated by about five feet. The group in front of us had a guy stuck on it. He had slid in the mud and was stuck on his rear differential. Dave gave him a tug and he was off, and then Dave tried it himself. He got to the same spot where the other vehicle had and slid off, and went right onto his rear differential too. A tug from JJ and Dave was off of it, too.

Next up was the waterfall. The group before us had a vehicle on 35" tires trying to climb it. The mud, however, proved to be too slick and he had to go around. JJ, now leading after he pulled Dave off the last obstacle, took the bypass. After a couple of tries he got through.

Next Dave came, and there was a clunking sound. He got wedged on a rock that JJ had flipped up on end when he had gone through. This proved to be quite difficult for Dave. After hitting the gas a little too hard due to his frustration, Dave was strapped yet again by the CJ from the group behind us. She was very nice and pulled me right off of the rock. Unfortunately, Dave was still not through the bypass. He decided to get out and stack some rocks, even though he swore he wasn't going to do that this year with his new 33" tires. He swallowed his pride, stacked some rocks and drove through mumbling to himself.

The waterfall was the last obstacle and it was only 11:30, so we stopped and had lunch. The sun came out and warmed us up quite nicely. After an hour or so we packed up and drove down the back side with no problems. Stopping at the trailhead we aired up and reconnected our sway bars before heading home. It was a good day, even though Dave didn't get any pictures of himself on the trail. 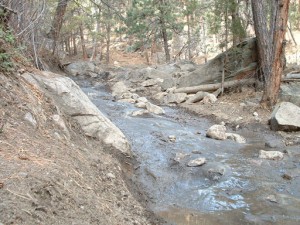