We had just finished Corkscrew Gulch and Hurricane Pass and we were now taking California Gulch down to Animas Forks. The initial climb from the end is desolate and bare but pretty. We could see for miles, and Lake Como from above was very scenic. It wasn't long before we were at the pass, though. We stopped, and Roger walked the short distance to the crest for some pictures. You can see for a long way from up there.

The other side has some spectacular scenery, too. Numerous mines were visible on the way down. This late in the season, the wildflowers were no longer blooming and there was an absence of trees throughout the valley. All things considered, though, it was definitely a pretty drive.

When we got to Animas Forks, it was time to for lunch and a much-earned break. We'd already completed three trails for the day and we were going to do a couple more on the way back to Ouray.

A lot of the Animas Forks buildings have been brought back to pretty good shape. The Duncan House was fascinating, with all of the big windows. We reminisced about walking through the old hotel way back before it had been rehabilitated. Roger recalled actually walking upstairs in the hotel and peering out the second story windows. We did not venture over to the buildings, but opted for a leisurely lunch before heading over to Picayne Gulch.

Use the arrows or dots to flip through the previews of the other reports for California Gulch. Click one of them to read more and see all of the photos from that day. 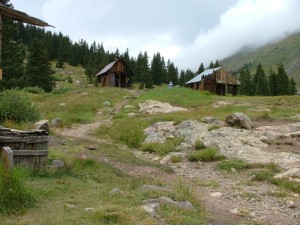 Led by Monica I.
We took California Gulch to get from the end of Poughkeepsie Gulch to connect with Engineer Pass again to do the Alpine Loop. The trail was beautiful and it was some of the best scenery we had for our trip. Lake Como is absolutely beautiful and it was fantastic to…
Join Us!
If you aren’t a Member or Subscriber, you can’t see all of the content on this site. Get membership information to see why this site is best when you join and log in