We took this trail on an impulse after coming down from Mount Antero as we had some extra time. What a weird trail! Besides the unusually high number of successive switchbacks, it would be nearly impossible to pass someone going the other direction. It made us nervous the entire trip but we didn't see anyone on the trail at all.

We did see some deer and a mountain mouse, none of which were afraid of us at all.

The mountain isn't very big or scenic, but the views really are. We watched big clouds move over the bottom of the Mount Antero trail while we were up at the top, then when we got down to that part of the trail everything was wet. It was cool to watch and we took way too many pictures.

Mount Princeton is an awe-inspiring mountain, with one big, jagged peak. It was worth the trip just to see it from a higher elevation.

This trail was really cool but it could get ugly really fast if you had to share it with other vehicles. Be careful! 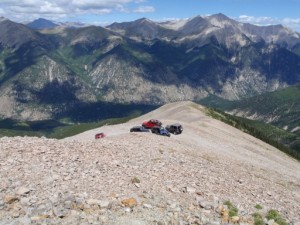 Led by Matt K.
Boulder Mountain was the second trail of the day. It was nice and sunny with warm temperatures outside. The trip started out with a rocky climb up many switchbacks all the way up to the top of Boulder Mountain. Most of the trail was very narrow. On one of the…
Join Us!
If you aren’t a Member or Subscriber, you can’t see all of the content on this site. Get membership information to see why this site is best when you join and log in