Trail Run on May 13, 2005
Report and photos by Monica I., Trail Leader
View trail information for Behind The Rocks

This ended up being a long day filled with obstacle after awesome obstacle. This is now one of our favorite trails. Everyone found their challenges on this trail and we didn't have to leave anyone behind. Robert came close to losing his Jeep in a ravine but he came out of it okay.

We started the trail and right away a few people were finding the first obstacle to be more difficult than they had anticipated. It's a slick hill of bumpy rock, covered in sand with big holes. Mike had to work at it for a bit because his longer wheelbase was making it more difficult. Ladd fell in a hole and did his best not to tip over. Stacy impressed everyone by driving right up it in her stock Wrangler, and Jason made it look easy in his Jeep's virgin run.

It was sunny and warm all day and we all managed to get sunburned -- from a little to a lot. The second downhill obstacle of ledges almost had us thinking we were at High Dive already but it was too mellow for that. We took some pictures and everyone continued on.

Robert went through some rocks and picked up a nail in his tire. They managed to get it out and get him patched in record time.

Upchuck was another story. You have to be really accurate with your tire placement on that obstacle, and it's very slippery with oil and sand. Monica went first and had to give it more than a couple tries to get through it. She ended up in the middle of the obstacle for awhile, tires spinning but not going anywhere. It ended up requiring a faster start at the bottom.

Robert went next and he had a good scare as he fell into the crack in the middle, his driver side tires and rims up against the rock. He worked at it for awhile and ended up getting out on his own without a tug from anyone. He also made it out without any body damage.

Eric and Tom both came down High Dive and then right up Upchuck like they'd done it a million times. Kendall came down High Dive in his little Samurai and managed not to roll it, but then had a little surprise on Upchuck. He gave it some gas at the bottom and popped his tires up in the air, sitting almost vertical for a few seconds and bouncing on his back tires. Luckily he came back down and drove up Upchuck without any further issues.

We also got to do these obstacles with an audience, the group behind us. We would see them periodically throughout the day and the rest of our stay in Moab, on different trails.

We cruised down the sandy road to Prostitute Butte and checked out the arches. We were on the Balcony Arch side when Jason and Stacy decided to head back to town instead of finishing the trail. You can easily get back to town using the dirt roads found in this area (see the Picture Frame Arch and Pritchett Arch trails). The rest of the group headed around the butte to check out Picture Frame Arch.

When we got to the second arch we watched Robert, Ladd, Tom and Eric climb up to it. The view from inside the arch was incredible, as the arch makes a picture frame for the area around the butte.

We took off on more sandy roads away from the butte and found ourselves at the crossroads for Pritchett Canyon and the rest of Behind The Rocks. We continued uphill on our trail. Around one of the corners we found Hummer Hill.

Hummer Hill isn't as big as some of the climbs on trails like Fins N' Things and Hell's Revenge, but it's still a nice dome. It was pretty cool to have a dome climb thrown in. Kendall was worried about his Samurai dying so he went around.

Roller Coaster was next, and it didn't give anyone any issues. Robert drove up it and didn't find it as challenging as he'd hoped, but it was still fun.

We came down the rocky section and found ourselves on a flat spot that looked like the edge of a cliff. It turned out to be White Knuckle Hill and we all walked it for quite awhile before anyone started it. Monica went first, with a tow strap on her rear bumper and a bunch of guys holding on tight. Kendall spotted her down and the first slide down the hill at the very bottom was scary but it went a lot more smoothly than everyone thought. It's very steep but with a few rocks stacked at the bottom you can actually stop once your front tires hit the rocks and you can stay there. It's close to vertical but not close enough to really make you go over. Without the rocks, though, it would be much more dangerous.

Tom went next and went down the last bit so fast he practically launched himself down it along with the people on his tow rope. Eric was next and he actually stopped on the last hill, enjoying parking nearly vertically and the lack of oil pressure at that angle. Robert came down then, smooth as glass, with no problems.

Mike was next in his Cherokee (XJ). Though we all thought that the longer wheelbase would give him issues at the top of the hill he never needed to back up or tackle the hill any differently than the rest of us did. His rear end popped up a little at the end but the guys on the tow strap kept him down and safe.

Kendall came down next and there were concerns about how little the Samurai was and how big the last part of the hill was. He made it look easy, though, like always. Ladd came down last, looking like he's done it before and stopping on the hill to enjoy the view.

Next we started down into Hunters Canyon and it got really interesting. Monica went down the mess of rocks following Kendall's spotting. She hit her bumper pretty hard but made it down in one piece.

Next, Robert got on the hill but he chose a line far to the right side of the trail, next to the soft sandy edge and above a ravine filled with trees. His tire slipped off and he ended up balanced on his spring on a rock, back tire practically hanging in mid air. He tried to back up but it only made it worse, and there was no going forward.

The rest of the group still at the top tried to pull him back onto the trail but his passenger side tires were well over a ledge that his driver side tires were still on. It wasn't going to work so the only way was forward. Monica got up on top of the last rocks to be used as an anchor so Robert could winch himself forward and back onto the trail. It was a scary moment and he came close to disaster but after it was all over it would be a good story to tell later.

The rest of the group avoided Robert's line like the plague and we all made it down together. Coming around a corner found us on yet another rock obstacle, then around another corner we found yet another one. Getting down to the bottom of Hunters Canyon was fun!

Down in the wash, Monica, Eric, Tom and Ladd all played in the twisty, flexy section. We soon came out to the intersection of Pritchett Arch and Behind The Rocks and we took a right turn to go see the arch. This trail was a blast! 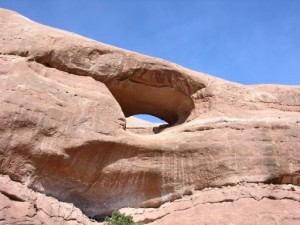 Led by Mike S.
Finally, after building up to it with some of the best trails in Moab, we were tackling the most difficult trail we would run. With other trail descriptions fresh in our minds, we hit the trailhead by 7:00 AM ready for a challenge. We were not disappointed. In fact, when…
Join Us!
If you aren’t a Member or Subscriber, you can’t see all of the content on this site. Get membership information to see why this site is best when you join and log in