We met at the Downieville Starbucks, and there were other groups of Jeeps there, too.  It made things a bit confusing, but then we all started talking and it was nice to meet other groups and hear about their adventures.  We had a new member join, Jim, and everyone was in a great mood.  We headed up to Georgetown and the trail, airing down at the wide spot in the road before the trailhead.  It was good we did that, because the trailhead was packed with other vehicles.  So, when we got to the trailhead we just headed up the hill.

The rocks were good from the start.  Aspen trees were almost completely yellow, though there were still a few green-leafed hold outs.  The sky was clear, and the day was perfect.

When we got to McClellan Mountain, we decided to do Argentine Pass first for a change.  So, we stayed on the main road.  We ended up behind someone for a short while, then they pulled over and we had a clear trail in front of us.

It didn't seem to take long at all before we were at the Waldorf Mine.  We circled the vehicles, and got out to stretch our legs.  There were a few other people around in Jeeps and on dirtbikes, and everyone had a smile and a wave.  We didn't explore too much or for too long before heading up the hill.

The ledge was fun, and no one had any issues.  At the "Y" we decided to go down to the basin first.  We could see some vehicles on the trail on the way up to the pass, so we thought we'd let it clear out for a bit.  The road to the basin is the roughest part of the trail, but it still isn't bad.  It doesn't seem like the winter and erosion change it very much from year to year.  The views at the end were awesome, with everything yellow and looking like autumn.

We were there for a while, simply because the weather was so nice.  We spent some time getting to know Jim and just hanging out.  But soon we headed back out, looking forward to the pass.

We got lucky, and didn't have to pass anyone on the way up.  When we got to the top, there were a few vehicles and side-by-sides parked almost to the top but not quite, so we lined up at the farthest point.  It was a bit windy and chilly, but we set up chairs for lunch.  This is probably where everyone got their sunburns, high up in the sky with no clouds.  It was a great lunch.

On the way down, we got lucky again and didn't see any oncoming traffic until we were almost back to the mine.  When we got there, we turned to go up the hill and to McClellan Mountain.  It was a great first half of the day. 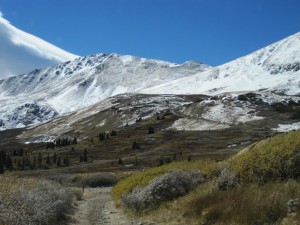