We made a loop of these trails along with S.O.B. Hill and had a really great day filled with scenery and challenges. Even though the day started out sunny it ended up being rainy and chilly for most of our trip, but these trails ended up being good ones for that kind of weather. These trails were a great addition to our list.

We started out by going up the Middle Fork and we turned at the intersection for S.O.B. Hill a couple miles into the trail. We were glad to have this intersection in the GPS, as it was hard to find. It was a right turn marked with a brown Forest Service sign with no numbers or any other clues.

We did S.O.B. Hill (see the other report for details about that trail) and had lunch at the top of Glacier Ridge. Then we went down to Georgia Pass and turned to go down the South Fork of the Swan River. From Glacier Ridge and Georgia Pass we could see the fork in the road on the North Fork as well as the top of Wise Mountain -- our destinations.

The South Fork was pretty mellow and we got down to Tiger Road really quickly. Then we backtracked just a little to go up the North Fork.

We had come down the North Fork the weekend before on our way from Radical Hill, and we were looking forward to driving up the hill instead of down it. It is a really long hill, and steep the entire time. Luckily we didn't run across anyone coming down, as it would have been difficult to pass.

We went all the way up Wise Mountain and hung out for a bit at the cabin, enjoying the view. It was clear enough to see Breckenridge and Keystone ski runs, and it wasn't as windy as it was the last time we were there. There were some people staying at the cabin but they were off enjoying the day.

Walt had been overheating on the way up the North Fork so he let his Blazer cool down for a bit. There was an odd smell, too, so we hoped for the best.

We headed off of Wise Mountain and up to the fork. The right part of the fork is an illegal route so we went up the left side. Both sides are very steep and loose, and the left side is a switchback right next to a cliff. It was definitely intimidating, but not too particularly difficult.

Walt decided he would play it safe and get off the mountain, and Jim volunteered to make sure he got home safely. They turned off at Deer Creek to take the easiest and shortest way down, while the rest of us continued on the Swan River loop. Walt made it home okay but he had issues all the way home.

The sign pointing the way to the trail at the top of the Middle Fork was down, so we put it back up in the supporting rocks, then we headed down. It was misty and rainy and it made the lush basin next to Sheep Mountain very green and gorgeous. There was a spur that took off to the left at the bottom of the basin but we decided to save that exploration for another time, so we continued on.

When we got to the old ghost town site of Swandyke we got out to check it out and stretch our legs. We noticed a tire half buried in the dirt and thought it was odd, but not nearly as odd as it was when we realized it was still attached to an entire truck.

The truck or car is buried upside down and you can see part of the frame, the half-tire, and some of both axles. It has been here for a very long time. We wondered about the history of it, and how it came to be there. Is the driver in there?

The well-preserved cabin in Swandyke isn't much compared to the one on Wise Mountain, but it's still very cool. This used to be a big town, with a huge hotel. It's hard to believe, with all of the trees there now.

We worked our way down to the intersection for S.O.B. Hill and took it again, planning to run back up and down it again before we left for the day. It had been raining all afternoon so this attempt was much different than our run in the sunny morning, and it was a blast!

These trails are beautiful and we had a really nice time. I'm sure we'll do these once a year. 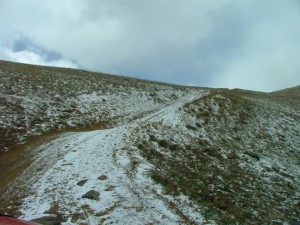 Led by Monica I.
We only ran the middle fork of the Swan River this time. First we ran the bottom half, then did S.O.B. Hill to the top and then back down. We had lunch at the cabin there, then headed out to do the top half of the middle fork of the…
Join Us!
If you aren’t a Member or Subscriber, you can’t see all of the content on this site. Get membership information to see why this site is best when you join and log in